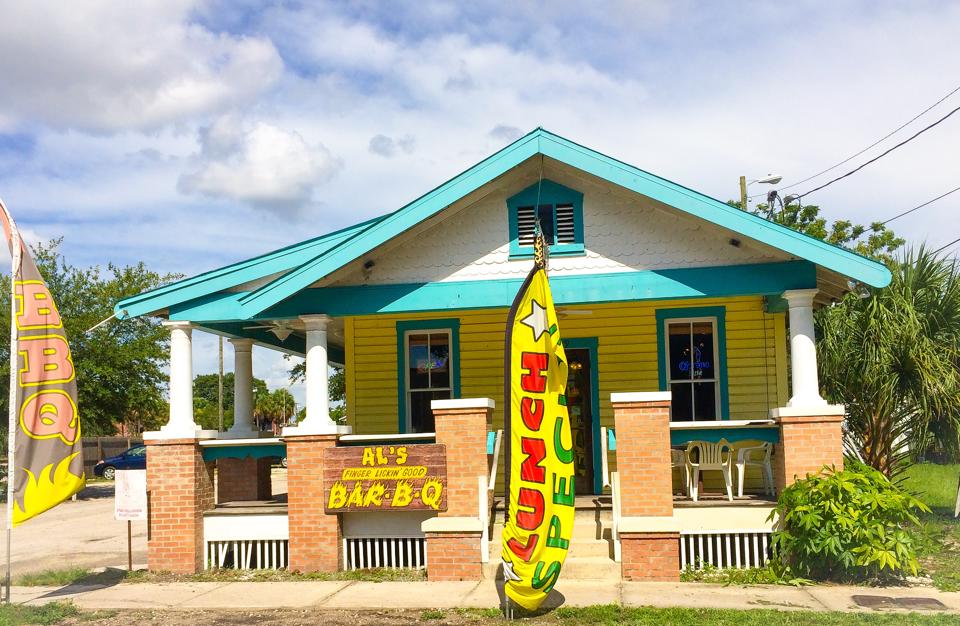 Dear Writer Friends–I’m not going to #AWP2018, but if you are, and if you’re going to Ybor City for an event, make sure to walk a couple blocks toward the train tracks and visit Al’s Bar-B-Que. It’s messy & great, and they serve big-ass beers! I went there with my dad a year or two before he passed away, and it’s such a nice memory. I try to get there when I visit my brother in Tampa. The Ybor neighborhood is worth a stroll, and has an interesting history as a hub of Cuban cigar manufacturing.

Snowy-Day Winter Cider Recipe — Insomnia, a snowy forecast, and lemons that needed to be used caused me to experiment with this recipe at 4 am this morning. Let me know if you like it. Portions are estimated rather than precisely calculated. I cook by instinct.

Candied ginger adds a welcome zing to this winter favorite. I used Jerry’s Nuthouse crystallized ginger. If you find you prefer more or less of a particular ingredient, you can adjust the recipe accordingly. (Cinnamon, for instance, can add an additional flavor note.) The recipe’s real magic is in the sweetness of the candied ginger combining with the tartness of the lemon. Makes 4 servings.

In a Pyrex-style saucepan, warm the apple cider on Low on the stove top.
Zest the lemon with a fine zester tool. Shave only the outer layer of the lemon; avoid pieces of white pith, which can add bitterness.

Reserve the juice of the lemon.

In a small food processor or blender, such as a Magic Bullet, add 1/4 cup of the warmed cider. Then add Craisins, nutmeg, cloves and ginger. Add the lemon peel and zest (if you don’t have dried lemon peel, add the zest of another lemon. The organic lemons I used were on the small side. One enormous lemon might be enough). Pulverize the ingredients until they appear almost paste-like. You want the fruit to blend into the liquid, so add more liquid if necessary. Fine bits of ginger or Craisins may still appear, but that is okay and adds a bit of pulp. If you don’t like pulpiness in your cider, blend longer. In general we are talking seconds, not minutes. A few good pulses should do. (I found a flat blade did fine in my Magic Bullet; the kind of blade I use for grinding coffee or spices. If your grinder is used for coffee, make sure it is very clean to avoid flavor-mixing!)

Add the ginger paste back to the cider on the stove top. Add the juice of your lemon. Make sure no seeds fall into the mix. Stir until blended well. Warm through. You can let it get to a low boil, but don’t overdo it. I let mine simmer for a half hour or longer. The simmer is what seems to make the ginger combine with the lemony-ness. Stir often enough that no bits of fruit cling to the bottom of the glass pot.

Serve in your favorite mugs. Add a shot of spiced rum or whisky for even more snowy-day cheer.

Tip: You can add other dried fruit if you like. Today I am adding a few chopped organic dates to the mix. You can also try apple slices, orange slices, etc. A cinnamon stick makes a fine garnish. If you like your cider sweeter, you can add a little orange juice or honey. Experiment!

*I know a lot of cider lovers float whole cloves in their brew. I don’t like their scratchy texture. If you only have whole cloves, you can grind a few in your Magic Bullet before creating your ginger paste.

“How good this week to be reminded how beautiful and alive Philadelphia becomes this time of year.”

Yesterday, driving home from Jersey, John and I stopped by the neighborhood where the Amtrak wreck happened here in Philadelphia. Naturally the cops wouldn’t let us close, but we could see a huge crane arriving on the rail line to move away the damaged cars. Such a sad, neglected area of the city that is. Everyone in the media calls it Port Richmond, but John tells me that little neighborhood is really Harrowgate, centered on the church there, St. Joan of Arc, now closed (that’s how Catholics measure boundaries in this city–by its churches). Harrowgate’s cut off on its own by the El and the NE corridor, sort of like Devil’s Pocket in South Philly. (See the pic below; Harrowgate is circled in yellow). Harrowgate isn’t just weeds and cracked sidewalks, it’s also roofs falling down, houses boarded up–more than the usual grit and grim. But it’s about community, too. Poor blacks and whites and hispanics talking on stoops, their kids playing in streets still roped off by yellow Do Not Enter tape. I understand many of the people in Harrowgate helped the victims right after the wreck. National media didn’t report this, but local media did. The city should use this moment to do something good for that little neighborhood. I think the people deserve it. If you read the Inquirer story, below, you’ll find their lives are in stark contrast to the more-monied people on the train.

This afternoon John and I went two blocks over to the Italian Market to buy food for dinner. That didn’t quite happen. The Italian Market Festival was going on. Every year there’s a Procession of the Saints and the streets fill up with Italians welcoming home relatives, as well as big crowds of the Mexicans and Asians who have arrived here more recently. Black folks, too. And Indians, and foreign tourists. Friendly hipsters with lumbersexual beards and serious neck tattoos. Lesbian couples groovin’ to the DJ playing The Electric Slide. Where else but the Italian Market Festival can you get an old-fashioned sausage and peppers alongside new culinary mashup like a chicken tikka quesadilla? Or rum drinks sipped from real pineapples? Or artisanal honey flavored with chocolate and habaneros?

The Festival is huge this year, larger than I think I’ve ever seen it, stretching up to Fitzwater and down to Federal, with dancing areas and music stages at the intersection of each block. I’d expected to see political candidates glad-handing the crowd in advance of Tuesday’s primaries, but no. Started in ’71, the Festival predates Rocky Balboa and ties in with First Holy Communion at St. Mary Magdalen De Pazzi, where the Procession of the Saints begins after church on Sunday. There’s no longer il palo della cuccagna, the climbing of the greased pole, which once stood 25 feet and was topped with prizes of money and slabs of meat. Yet still the festival is about food, food, food. And music. And laughter. And drinking with friends.

As the rain held off, everything seemed an extra delight. Who cared about the oppressive humidity in the air? In Molly’s Books & Records I watched a family of French audiophiles delight in snapping up a hundred bucks of vintage American vinyl. In the bar John and I sometimes frequent for Bloody-Mary-and-eggs-Benedict brunches, I talked to a young Bucks county blonde about which Philly neighborhood she should move into now that she’s considering her first big city apartment. Down past Washington Avenue, where cheese shops and fruit stands give way to taquerias, John and I dodged cellphone marketers and wobbling beer drinkers. A Mexican woman mixing tequila drinks in the heat shot me a drowsy smile when our eyes caught.

John made me laugh and he made me dance. How good this week to be reminded how beautiful and alive Philadelphia becomes this time of year. I love this city even when it breaks my heart.

Get into the holiday spirit with poetry! Moonstone is hosting a holiday potluck and reading to celebrate the release of their new anthology of poets who have read over the past year. I plan to read some holiday-themed work.

Moonstone writes:
Book Launch and Holiday Party – Sunday December 14, 2014
The party will be at Brandywine Workshop (728 S. Broad Street) December 14, 2014 starting at 1PM.
· This will be a book release, mass reading party – similar to Poetry Ink but limited to poets who have been featured at Moonstone readings
· Holiday Party – Bring something good to eat to share
· This will be a terrific holiday gift for poetry lovers
· A terrific anthology for creative writing and poetry classes since most of the poets are from the Philadelphia area and they can be heard at readings around the city.

So happy to be in such good company in the new issue of Mead, a literary magazine in which I had the good fortune of publishing a poem called “Lent” a while back. You can read the review of my chapbook Velvet Rodeo by poet Suzanne Parker at this link. http://www.meadmagazine.org/velvet-rodeo.html. Mead is definitely worth checking out. I was especially pleased to see Valerie Fox’s poetry in the new issue. She is also doing excellent things at Poems for the Writing. Another treat was a new poem by San Francisco poet Melissa Stein. “Hive” would have found a good home in her first collection, Rough Honey, and I bet it will end up in an equally good second collection of her work soon. Lisa Sewell, a Villanova professor, also has a fine poem in the issue.

Mead is the Magazine of Literature and Libations. All the poems and prose are divided into varieties of cocktails. Whether your poison is a saintly Shirley Temple or a devilish High Ball, pour yourself a tall one and check them out.

I was happy to learn this week of a new poem, “Lent”, out in MEAD: A Journal of Liteature and Libations. Each issue is edited by a “house barkeep” who creates a heady mix of poems, not necessarily alcohol-related, but designed to warm like good spirits or intoxicate like effervescent wine. Suzanne Parker, a wonderful poet herself, called the shots this time around. What makes this publication all the sweeter for me personally is that one of my favorite poets, Mark Doty, has a poem in this new issue, too. It all comes on the heels of a recent Pushcart Prize nomination and a few other nice surprises. Sure, there have been rejected poems, too. But you have to celebrate the victories, right?  You can read the poem here. http://www.meadmagazine.org/McQuain.html Reading it will also explain the rationale for the photo of these  delicious-looking almond cookies.

Sometimes I forget how lucky I am to live in Bella Vista near the Italian Market, which, these days, is also home to large Mexican and Asian populations. A block or two from our house is a large plaza wit

h an Asian smokeless barbecue restaurant, a pho noodle shop, a Chinese restaurant and a grocery featuring everything from glass noodles to live eels to baby bok choy. Recently we picked up Chinese food, and while waiting for it, strolled the aisles of the nearby grocery.

And it all pays off in the soup I made Friday: mushroom with vegetable noodles and bok

choy, and a bit of scallion and pepper. Plus my own secret blend of diced dried vegetables to flavor the broth with that extra kick. Not bad, if I do say so myself.