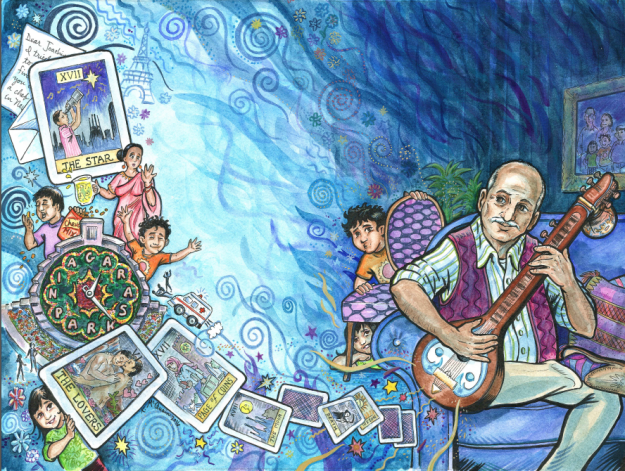 Summer 2015 was a busy one in terms of new visual projects, including a poetry portrait series for Fjords Review and this new wraparound cover I illustrated for poet Kazim Ali’s new book of short stories, UNCLE SHARIF’S LIFE IN MUSIC. @KazimAliPoet #KazimAli @SRP_Bryan

The wraparound cover features images of the nephew and uncle from the title story as well as tarot cards and allusions to other stories in the collection. Pen and ink and watercolor. You can order the book here: http://siblingrivalrypress.bigcartel.com/

Here’s the cover with the title added by the boys at Sibling Rivalry Press:

About the Book: On the eve of war, a group of artists try to stage a performance. An ill-thought-through deception to protect a friend threatens to unravel several relationships in a circle. A young man wakes up in a church graveyard with complete amnesia except for scraps of memories that appear to be from several different peoples’ lives. Two friends, haunted by the ghost of failed intimacy and the shadow of disease, wander the rainy streets of Paris. A musician makes a clumsy last-ditch effort at seducing a lost love. At Niagara Falls a neglected boy discovers his relationship to God. In a contemporary re-telling of the Majnoon and Laila myth, an astronomer falls in love with the sky. These six stories and novella from the author of the novels Quinn’s Passage, The Disappearance of Seth and Wind Instrument intertwine their concerns for the artistic life and the importance of the creative impulse with their belief in timelessness and the universal need for human empathy. Kazim Ali brings a poet’s attention to language, a musician’s sense of structure and a choreographer’s sense of character and movement to these dynamic and genre-blurring pieces which range in form from coming-of-age story, speculative fiction, ekphrasis, epistolary fiction and tarot deck.