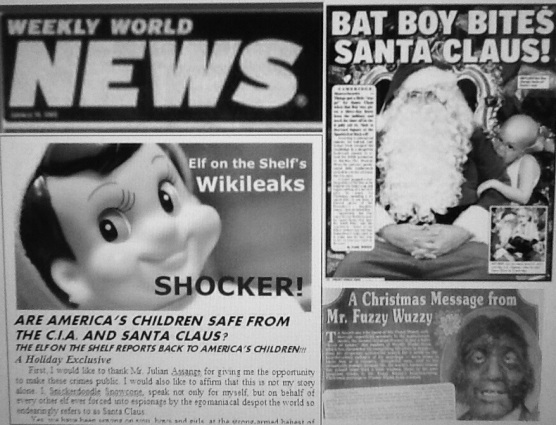 Christmas is a very dangerous time of year in the land of the Weird: Bat Boy biting Santa, and not even Mr. Fuzzy Wuzzy’s heartwarming Christmas message is able to make all well and good again. Now the Elf on the Shelf is offering up his secrets to Wikileaks! Will American children ever be safe again?

Jolly? Not so much anymore. The hand tools The Boss once taught us elves to use now gather dust in his crumbling workshop. Manufacturing has been outsourced to China and other countries, many with lax labor laws where children no older than yourselves work like drones to grind out petty playthings. They sing no carols. Their hands do not move with the happy glee that mine once did. Don’t be surprised if there is a little blood in your fashion doll’s bright red lipstick. I can guarantee you the sheen on her hair is laced with tears.

The Boss has sold out, you see. His heart has become as hardened as his arteries…. Read the rest of the startling truth by clicking here! 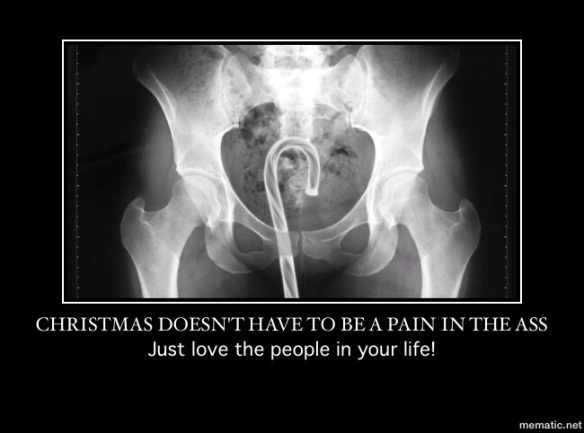 Don’t let shopping be the reason for the season. Spend it with friends.

Chamber of the BIZARRE features a write-up on Naked Came the Cheesesteak today.

Tom Joyce's chamber of the bizarre

“Naked Came the Cheesesteak.” Weird fetish site? No. At least … I hope not.

Actually, it’s a “serial novel” mystery, with each chapter written by a different Philadelphia-area writer. And it’s happening right now at Philadelphia Stories, where a new chapter is being released each month.

So how do nakedness and cheesesteaks tie in? Here’s a little bit of background.

Back in 1969, a bunch of journalists played a literary practical joke by releasing a deliberately bad book titled “Naked Came the Stranger,” in which each of them wrote a different chapter and released it under a pseudonym. Their intent was to show that any book could be a success, as long as it featured lots of sex. Turns out they were right. The book became a best-seller.

In 1996, a bunch of South Florida-area writers — including the legendary Carl Hiaasen and the beyond-legendary Elmore Leonard — did…

“…extend love, rather than judgment to those who are hurting…”
Nicely said. A good take on how to view the Paris attacks in relationship to violence around the globe.

I’m saddened by some of the posts I’m seeing on social media, chastising those who are expressing love and solidarity in the wake of yesterday’s violence in France. Moments of great empathy are not a social failing. If anything, they are an opportunity to build better and expand our collective compassion. Posts that more or less amount to, “if you care about this, but didn’t post about [insert tragedy here], I’m judging you” help nothing and heal nothing.

This should certainly be a moment of greater realization. It should be a moment of understanding the connectivity of violence and certainly a moment to reflect on what society may have averted its eyes from over time – and of realizing that this and those failures are really all part of the same tragedy.

We know that racism, uneven media coverage, and the seeming constancy of some violence play into a larger…

Like Loading...
#NakedCheesesteak    The first few chapters of NAKED CAME THE CHEESESTEAK are live at Philadelphia Stories here.

NAKED CAME THE CHEESESTEAK is a serial murder mystery written by 13 Philadelphians for Philadelphia Stories magazine. While the novel is designed to be a fun romp, poking fun at the sacrilege of such things as vegan cheesesteaks, it also touches on  more serious themes. These include the exploitation of adjunct instructors that college towns like Philly use to staff various campuses.  NAKED CAME THE CHEESESTEAK is a wry portrait of Philadelphia’s neighborhoods, cuisines, educational institutions and legal systems, all wrapped up in greasy wax paper and shiny aluminum foil.

The idea was cooked up last winter by a handful of writers meeting over wine and chili in a Society Hill townhouse. The story 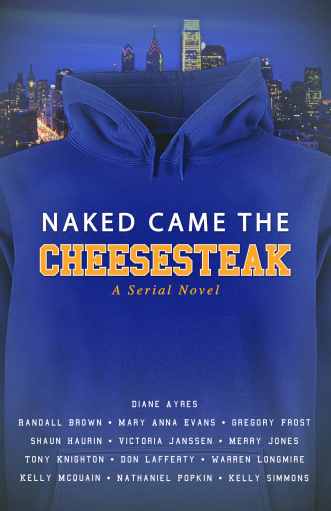 centers on an intrepid Philadelphia detective trying to solve the puzzle of who is poisoning college students at campuses across the city. The novel features a huge cast of flamboyant Philadelphians:  an African-American police detective named Chelsea Simon; her bad boy restaurateur husband, Arturo; a crusty, trench coat-wearing news blogger named Ben Travers; the Nicholettis, a sprawling South Philly family with ties throughout the city; and a host of college skate boarders and scullers who get caught up in the malfeasance of the unknown serial killer.

The novel will be published by the magazine’s books division, PS Books.

New York Poet Michael H. Broder is curating a daily poetry project called HIV Here + Now, which is a countdown memorializing what’s been lost, what’s been gained, and what’s changed as we approach the 35th year of a word with HIV and AIDS. For some of us, it means the memory of friends lost and protests in the streets. For others, it means, as Michael eloquently describes, “being on lifesaving meds, getting your life back, wondering what your life meant, what your past meant, your present, how to process having lived through that and living in this life now, where the crisis is ‘over’ in most of the public mind, but you still take your meds every day… .”  Boomers, Gen Xers, and Millennials have all experienced the HIV struggle in different ways, and this project is an account of that: the fear and anxiety of the disease’s most harrowing days; the hopefulness of sustainable treatment; the question marks of what’s to come. Michael published this poem of mine for the project today, but I urge you to check out the work of the other poets at the website and to read his “About” page to learn more.

Like Loading...
Who is poisoning people on local college campuses? On Sunday The Philadelphia Inquirer published the first chapter of NAKED CAME THE CHEESESTEAK, a serial murder mystery I co-wrote with 12 other #PhillyWriters. Read it here. Kelly Simmons offers the first rollicking chapter… but don’t get too attached to her characters. This novel comes with a high body count.
Join us for the launch party Thursday night of this week at Tattooed Mom. 5th and South Street, 21+.
My chapter debuts online during week 6 of this fun project from Philadelphia Stories‘ book d

ivision.   Each week, a new chapter will drop at the link!