What to do with the white space? This is a good conversation to have, and I think I’ve probably had versions of this conversation with Cleaver Magazine, and other journals. I love, love, love playing with space in a poem because it’s another tool you can use to influence cadence, but I also know it’s risky to send these poems to online journals. I hate that journals might reject a poem just because of formatting, and I worry that if all poems are flush-left in a magazine it will be stultifying in the long run. Some poems just don’t sound their best unless you play with the white space. Still, editors have to respect the limits of their publishing programs. What do you think? Does the look of the poem influence where you send it online? 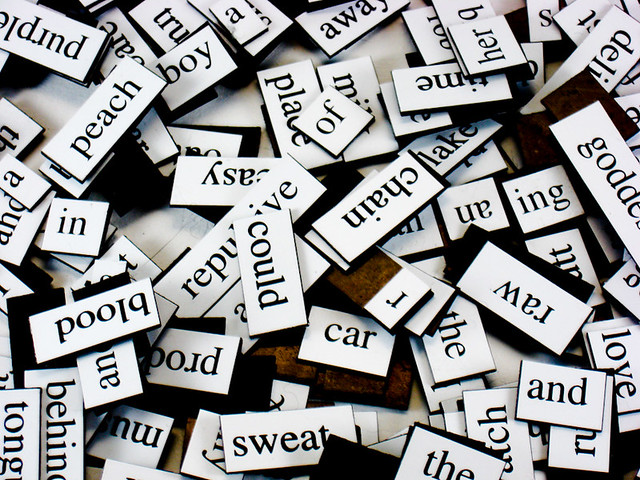 HEY POETS, did you know that your spacing decisions can affect your chances of being published successfully in online literary magazines?
Most writers, poets included, create and distribute their work on word processing software such as Microsoft Word or Google Docs. It’s what we’ve always done. These programs are great for viewing work on our computers and for making print-outs, but they don’t play well with online publishing platforms like WordPress (on which our site is built), Drupal, Joomla, and others.

This is a software and design problem that many poets are unaware of. And it could be the reason certain poems you submit to online publications are rejected or end up being published in a different-looking format from what you intended.

What’s this ‘white space a problem’? The word processing programs we writers use to create poems make it easy for us to spread text across a page, just as we used to do on a typewriter. Just tap the space…

A new poem of mine is out today via Out of Sequence: The Sonnets Remixed — live over at Upstart  (http://www.clemson.edu/upstart/Essays/sequence/sequence.xhtml).  D. Gilson is the editor on this project, which remixes Shakespearean sonnets into something new. My poem clocks in at the very auspicious number of 69, and is inspired (sadly) by all the crazy gun violence in schools we have to live through.  To read it, click on http://www.clemson.edu/upstart/Essays/sequence/69.xhtml. Other poets include Donna Vorreyor, Rj Gibson,Wayne Koestenbaum and many, many more.  A print version of this stand-alone volume of Upstart: A Journal of Renaissance Studies will be available soon in print.

Cover art for Out of Sequence

A number of reviews of Velvet Rodeo have appeared over the summer, so I thought I would collate some excerpts here. The reviews have been generous with their discussion of the book’s narrative and formal elements. I hope you like what you read and will consider buying a copy at this link to support Bloom Books. The print run is limited, so get yours before they sell out.

What Reviewers Are Saying about VELVET RODEO

“Since 2010, Bloom, the first-rate national LGBT literary magazine has been holding competitions to find the community’s most exceptional writers of poetry and prose. Velvet Rodeo, the chapbook by last year’s poetry winner, Kelly McQuain, is a gem, worthy of attention even from readers who typically don’t read poetry (Bloom Books. $8. www.bloomliteraryjournal.org). Born in rural West Virginia, McQuain, now in his 40s and based in Philadelphia, beautifully reflects on the tension between the beloved natural landscape of his childhood and his need to escape those environs to express his own sexual nature in the standout opening piece, “Scrape the Velvet from Your Antlers,” His cub scout troop’s day dressing up as Native Americans evolves into a personal experiment in drag amid the clever wordplay of “Brave.” The equally witty “Uncle” finds an adult McQuain fantasizing about a son when his estranged infertile married older brother asks if he’d be willing to make a sperm donation. These are indelibly tender snapshots of a gay life that straddles environments and eras.” –Jim Gladstone, “Travel Bound”, Passport Magazine, August 2014.

“Between a single dawn and dusk, I shadowed a speaker through adolescence and into adulthood, from young summers in West Virginia to liquored confessions in Mexico. Kelly McQuain’s Velvet Rodeo is a rare chapbook that spans such lengths—though, that is one of poetry’s potentials: every verse paragraph a vignette. And yet while McQuain’s poems are distinctively narrative, they are rife with imagery; from nature to anatomy, McQuain’s imagery evokes experience, from discovering one’s body to discovering parental fallibility. It is fitting then that Velvet Rodeo’s opening poem, “Scrape the Velvet from Your Antlers,” begins spiraling outward, from pastoral aesthetics to something more existential….” — Matthew Girolami, Cleaver Magazine, July 2014. More at http://www.cleavermagazine.com/velvet-rodeo-by-kelly-mcquain-reviewed-by-matthew-girolami/

“Coming of age, finding identity, negotiating family relationships; these themes are all here, explored through Kelly McQuain’s characteristic precise description and formal attentiveness…. [T]he collection is thoughtful and deep. The lyrical and narrative modes are wonderfully blended….” —Poems for the Writing, July 2014. More at http://poemsforthewriting.com/2014/07/13/velvet-rodeo-by-kelly-mcquain/

“Velvet Rodeo, by Philadelphia poet Kelly McQuain is clearly a winner. These are well-crafted poems with surprises, narrative twists, and a rich use of vocabulary. Several themes predominate in McQuain’s work. The most important is his origins: growing up in rural West Virginia…. [T]he strongest of all the poems in the collection, called “Creation Myth”… describes the early lives of both his father and mother. Extraordinary philosophical questions are thrown at the image of the mother: ‘How to separate the cosmic egg? Separate the raw from the cooked?’ Like his son, the father in the poem was also an artist, if on the fringes of the creative world. In an almost rhythmical ending the poet recognizes the enormous debt to his parents, knowing he can never repay them.”– Dan Evans, “Gay Presses: Alive and Thriving”, The Fire Island Tide, May 23, 2014.